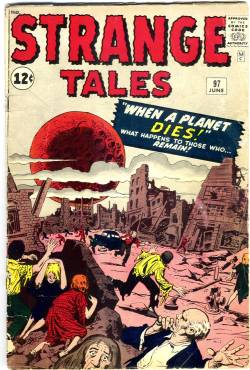 thebristolboard:Forgotten masterpiece: OK, maybe not quite a “masterpiece,” but this short story holds a special place in comics’ history. While everyone knows that Spider-Man first appeared in Amazing Fantasy #15, which showed up on newsstands in August 1962, Aunt May and Uncle Ben (without the Parker surname) actually debuted two months earlier in “Goodbye to Linda Brown” in Strange Tales #97, which was published in June 1962. For Amazing Fantasy #15, Ditko simply tweaked the character designs (though Aunt May looks virtually the same), recast th

Behind the scenes updates

I am redoing the database and getting it ready for a new project. Atlas Tale should get some upgrades with these changes. I started some of these changes in 2009 but had a lot of code and data disappear on me (user error) and I lost momentum. However, things are moving along again!

I have not been working on this site regularly for quite some time. I had a lot of work to do to finish it. Since that is what I do all day long, I found it difficult to be interested enough to finish up.
I didn't answer all the emails that I should have. I intended to - but then it got to be weeks later and I gave up.
For all that I would like to apologize ... profusely.
Not sure what came over me but I decided to finish up a lot of the backend stuff this week - there is a lot to do but I got enough done that I can index stories again. While this burst of enthusiasm continues, I am plowing through the backlog of stuff that has piled up. There will be a lot of activity for as long as I can manage.
Thanks for hanging in there - I'm hoping that I can keep things from being dormant again. Wish me luck.
GREG